The city of Los Angeles (also known simply as L.A., and nicknamed the “City of Angels”) is the most populous city in California. Located on a broad basin in Southern California, the city is surrounded by vast mountain ranges, valleys, forests, beautiful beaches along the Pacific Ocean, and nearby desert.

Furthermore, at least in the English-speaking world, it is still obligatory for most celebrities-to-be to live for several years in L.A. until they make it big in Hollywood. Most of them ultimately flee elsewhere after they get sick and tired of being chased by crazed fans, tourists, and paparazzi, and only after they’ve hooked up with the top talent agents in Hollywood (meaning that now the best scripts and songs come to them, rather than the other way around). Thus, L.A. is notorious for its celebrity-oriented culture, as exemplified by the “star maps” sold at tourist traps which feature known locations of celebrities’ homes. 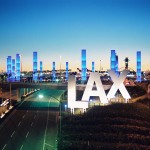